Iowa native Todd Snyder launched his menswear label in the Fall of 2011, and in a few shorts years, earned some of the fashion world’s top honors: He won the CFDA Swarovski Menswear Award three years in a row (2012-2014), and was selected as a 2013 CFDA/ Vogue Fashion Fund finalist. In 2016, he was nominated as the CFDA Menswear Designer of the Year, one of five contenders for fashion’s top honor. Equally impressive is his ongoing collaboration with Champion; every season, Snyder releases sharply structured essentials with the American heritage and activewear label, anchored by his signature triangle-gusset sweater. Most CFDA darlings would kill for that kind of accessibility. 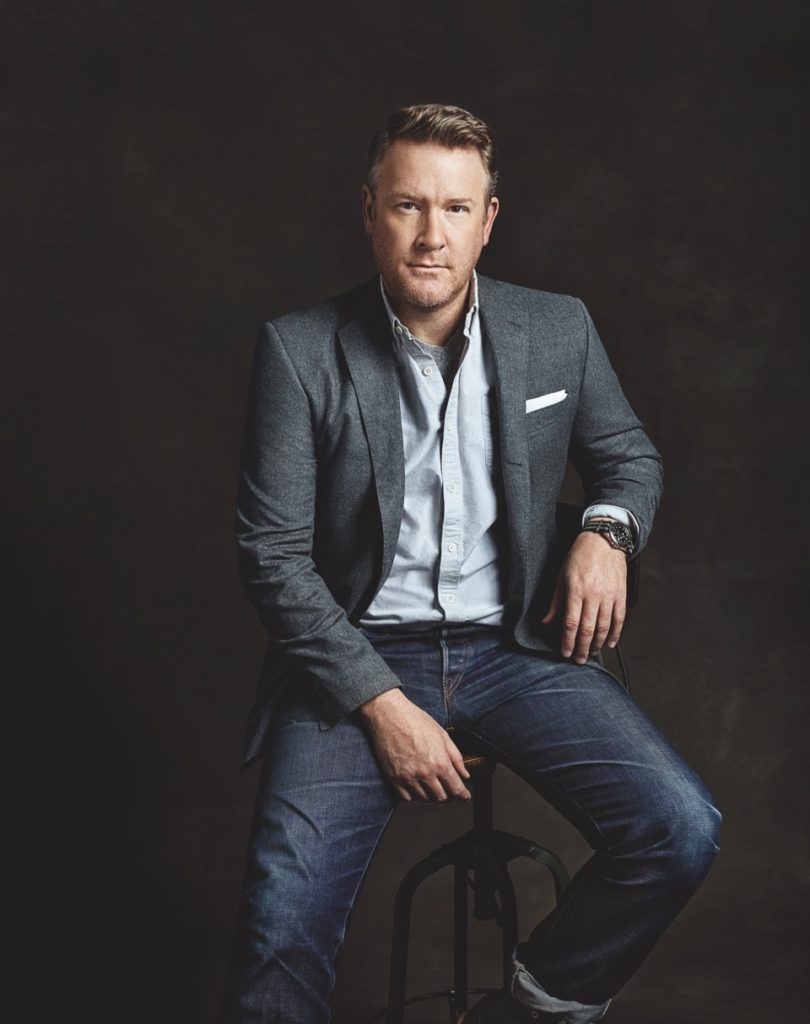 But it wasn’t overnight or unearned success. After studying textile design at Iowa State, Snyder moved to New York in 1992 and began interning at Ralph Lauren. He started out with petty tasks like getting coffee and cleaning closets. He would occupy idle time by doing sketches. Snyder couldn’t afford to buy designer clothes so he would go to fabric stores and purchase leftovers to craft his own daywear. During a meeting, someone asked Snyder who made his shirt. “Well, I do,” he replied. Everyone in the room was spellbound. His days of getting coffee were done.

After refining his tastes at Ralph Lauren, Snyder would move to GAP, where he designed for 10 years. There he met Mickey Drexler, the then- CEO who was responsible for an impressive era at the retail brand in the late 90s. He also worked alongside Jimmy Olsson, who is now the CEO of Snyder’s company, allowing Snyder to focus on the creative operations. “My philosophy has always been to make sure I have a balanced business plan, and having somebody like Jimmy is the secret to my success,” Snyder says. He credits Drexler with this acumen of needing to surround oneself with brilliant people.

When Drexler left for J.Crew, he brought Snyder aboard to lead menswear. Snyder studied Drexler’s mannerisms as a leader: He listened to his team on all levels, he emphasized customer service as a core value. “He would tear down the barriers between him and everyone else,” Snyder says of Drexler’s grounded leadership. It would be the foundation of Snyder’s own brand—he holds town hall meetings with his own employees now.
One of the label’s biggest moves came in 2015, when American Eagle Outfitters acquired Todd Snyder (the brand) for $11 million. It’s a new
playbook, but one with proven success, particularly in the hands of Chad Kessler, American Eagle’s Chief Merchandising and Design Officer. Kessler came from Abercrombie, where he helped Hollister grow into a billion-dollar business in six short years. Already, AEO has opened a retail shop— Todd Snyder Madison Park, in NYC—in addition to four collegiate-wear shops called Tailgate, which recall some of the notes that have made Snyder’s Champion collaboration so successful.

Midwest boy takes to NYC, fetches coffee, serendipitously starts designing, works for three of the country’s most successful retailers—one as menswear director—starts own business, wins accolades, partners with one major label is acquired by another, four years after launching… Todd Snyder’s momentum cannot be stopped.

SPRING 2017 COLLECTION
“This was a transition for us, as we blend casual lifestyle with our tailored product,” Snyder says of his latest collection. “This season we really wanted to make a big departure, and move to the sports world, because it’s become such a huge part of today’s culture.”
The result is “Getaway”: an exploration of Monaco at mid-century, the charm of a gentleman’s seaside holiday, and the allure of European road trips. It started as a tour through subdued colors, natural fabrics, and classic styling of time and place. Soon, however, it was revving with the energy of the Monaco Grand Prix, motoring through a Technicolor vision of the 60s and 70s, and ultimately cruising into the richly hued hijinks of a Wes Anderson film. It is an elegant, eclectic collection that mixes street style with playboy sophistication. Classic double-breasted linen suits, nautical sweaters, and genteel performance fabrics collide cheekily with bold racing aesthetics and insouciant athletic looks. Exuberant colors, graphic stripes, and slick satins capture the cinematic swagger of larger-than-life personalities, with retro appeal recast for today. Contrasting elements are harmonized through tonal styling and a nonchalant mix of formal and informal, tailored and casual, all paired back to the fresh city sneaker—Todd Snyder’s answer to the racing shoe. 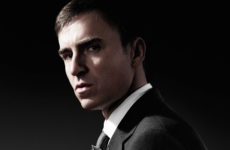 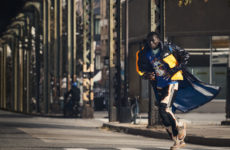 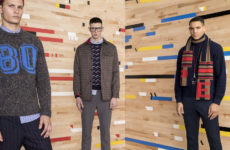